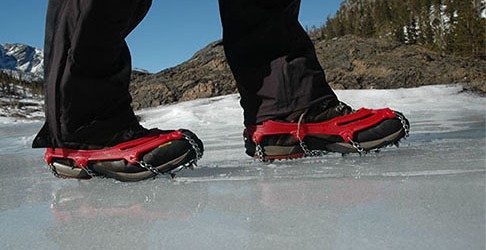 WALKING ON ICE – KAHTOOLA TO THE RESCUE!

Winter is coming to an end and Spring is showing strong signs of taking over.  Still…areas of snow and ice remain, many that we’ll have to negotiate with our feet.

For years now, many of us have been looking for that product that will give us secure purchase on icy, snowy and slippery surfaces.  In just the past few years, a number of companies have introduced products for the bottom of our shoes that supposedly will keep us upright and stable while navigating across slick surfaces.

Some products work fairly well, some do little to keep us secure, some slip off easily or come apart after only little use and some work well only on icy surfaces but not on the hard surfaces, like concrete or asphalt or lakeside rocks, that we also have to cross to reach our destination.  There is one product though that I have to bring to your attention –MICROspikes by Kahtoola.  www.kahtoola.com

This year, at the Winter Outdoor Retailer Show, the largest gathering of outdoor gear and clothing  manufacturers and retailers and specialty products in North America – www.outdoorretailer.com – I had the opportunity to test Kahtoola’s MICROspikes.  Kahtoola had set up HUGE blocks of ice near their booth and had a variety of sizes of MICROspikes for visitors to test.  My first image of someone testing the “spikes” was a gentleman dressed in a gorilla suit dancing to his own music…

Well, I figured if a gorilla could walk securely on ice using MICROspikes, so could I!  I strapped on a pair ,  (MICROspikes are labled left and right and front and back) and gingerly stepped up on the blocks of ice.  If you’ve ever been walking along during colder months only to have your feet fly out from under you unexpectedly because you hit a slick spot, you know how hard the ground can feel when your body suddenly slams into it.

Walking on the ice in the MICROspikes was, to say the least, a delight.  Why?  Because the MICROspikes dug into the ice, even when I tried some obviously uncoordinated dance and stretching moves.  There wasn’t even a hint of slippage whether I was moving forward or back or side to side.  They were and are bombproof on ice, slick surfaces and, yes, on hard surfaces like concrete or lakeside granite at Mills Lake in Rocky Mountain National Park near Estes Park, Colorado.

Fine you say, but what about in real world conditions?  How are they on real snow and ice and on hard surfaces?

I’m glad you asked.  To challenge my own perceptions, I and a friend hiked to Mills Lake in Rocky Mountain National Park to test the MICROspikes on the frozen surface of Mills.  The granite runouts leading to the lake were free of snow, even thought the lake was still frozen.

Wanting to see how effective MICROspikes were on rock that was uneven and slick, I strapped my vivid red colored MICROspikes on and headed toward the Lake.  Whether on rock or ice there was not even a hint of slippage.  After gallivanting around on the frozen lake for a bit I handed off the MICROspikes to my friend Lexie who is a yoga instructor.  Her goal was to see if the Kahtoola would hold her in a variety of poses -most that I couldn’t come close to doing.

While Lexie was had a bit of trepidation when she was moving into the backbend, the MICROspikes performed beautifully.  Her biggest concern became whether her gloves would hold her hands in place.

Packing MICROspikes is easy since they’re made of a flexible rubber-like material that folds easily into a pocket or a storage bag that can easily be slipped into a pocket or small area in your pack.

Conclusion:  Short of wearing full on crampons, which are too much for most applications, Kahtoola’s MICROspikes are at the top of my list for footwear traction.  Priced at retail at $59.95, MICROspikes come in higher than many alternatives but are more than worth the added cost.  Think of what one quick fall could man.

For more information on MICROspikes, visit Kahtoola’s site at www.kahtoola.com.